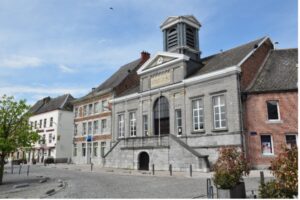 Between 22 and 24 June 2020, the 6th Biennial Conference of the European Society of Comparative Legal History took place at the University of Lisbon, Portugal. The conference focused on the history of methods of legal professionals across Europe and the world. As judges, lawyers and other legal professions have developed differently from country to country, substantial differences in training, method, role, and work can be found. These themes were discussed in a historical and comparative perspective to understand where we are now, and where we might be heading. Emanuel van Dongen gave a lecture on the history of the justice of the peace in the Netherlands, Belgium and France. This blog summarizes his lecture and places it in a broader context.

In the second year of the French Revolution (1790), ‘the year of hope’ (G. Walter, La révolution française vue par ses journaux, Paris 1948), a new Decree on the organization of the judiciary was adopted and created the ‘justice of the peace.’ The French Revolution brought the ideals of deprofessionalisation and simplification of the judicial system (Halperin 1996). The evolution of the judicial system in France, but also in Belgium and the Netherlands, in the period afterwards has been studied comparatively in 2007 by the Belgian legal historian Dirk Heirbaut. In the meantime, particular interest in the institute of the justice of the peace resurfaced in the Netherlands. In 2021, we concluded a study on proximity judges, which included a historical study on the (French) justice of the peace.

The juge de paix, first introduced in France for civil matters, was made to prevent quarrels within the community and had to be simple, conciliatory, and fair. The justice of the peace was created because of the need to reduce the number of civil proceedings in ordinary courts and to leave smaller disputes to the justice of the peace and his deputies, so as to enable the quick, inexpensive and equitable resolution of local conflicts. The justice of the peace was given a dual role, on the one hand as a judge, and on the other as a conciliator. Incidentally, this idea of proximity broke down not long after a huge reduction in its numbers was brought about by order of Napoléon Bonaparte in 1801. The justice of the peace was above all a social actor – the historical archives show its popularity in its early days. Extrajudicial ‘small’ conciliations, an intense activity in the 19th century, decreased in the 20th century. Gradually, the justices of the peace became more urban, detached themselves from the local notables and recruited from the new middle layers. With their professionalization, the expansion of their powers, and the assignment of several cantons, they moved away from the litigants (both geographically as well as socially) and closer to the ordinary magistracy.

In the 20th century, the depopulation of certain areas, as well as the diminishing attraction of rural life for the young led to a drastic decrease in the number of brought cases. Several cantons were regrouped under the jurisdiction of a juge de paix and the administration of justice moved further away from the citizen. The 1958 reform led to the disappearance of the juge de paix and its replacement by the juge d’instance, a (local) judge for small civil cases. Although there was first a mandatory preliminary conciliation, it later became optional. The 1958 reform did not take over all the tasks of the juges de paix, as evidenced by the later creation in 1978 of the conciliateurs and then the mediators. In view of the proximity and capacity problems, the juge de proximité was introduced in 2003. The juges de proximité were non-professional judges charged with the task of resolving minor civil cases and trying minor criminal offenses. In addition, they had a legal, conciliatory role. Its creation led, however, to a more complex division of jurisdiction in the first instance. In 2011, it was decided to abolish the jurisdictions de proximité and return to the old system – which was only realized in 2017. In addition to a complex division of competences, the element of mediation did not appear to be well developed. In practice, the limits of accessibility were reached since the juges de proximité considered a legal decision necessary even in simple cases. In addition, a backlog of cases quickly developed, caused by the lack of experience with judicial litigation on the part of the judges. In 2017, we see a mediation rate of the conciliateurs de justice of 51.2%. As of 1 January 2020, the juge d’instance was abolished.

Interesting was the fact that in the same session, Piotr Pomianowski discussed the institution of judges of the peace in Poland. In 1807, Napoleon established the Duchy of Warsaw, and introduced a legal system in French style, including the institution of judges of the peace. Their competences included mediation in civil cases. In the beginning (1807-1812) their reconciliation was quite effective (effectiveness of over 50% – Rosner 1985). Some problems involved with functioning of the judges of the peace were the organisation of the courts of the peace in the countryside, the social position of parties of trials, as well as the relations between courts of the peace and other jurisdictions. Finally, the French style peace courts were replaced by communal courts and a new type of peace courts, in 1864, based on Russian patterns.

My conclusion is as follows. Heirbaut (2007) has stated that although France and Belgium abandoned the Ideals of the Revolution – the Netherlands, although rejecting much of its principles, managed to preserve more of its ideals. Deprofessionalisation never really took ground in the Netherlands – and in France and Belgium it gradually became less important. Simplification – practical proximity in fact – was really introduced (reform/changes from 1989 onwards), even further than imagined by the Revolution. With this point we come to the six/seven elements mentioned by Mak 2017/Bauw et al. 2019. With regard to the geographical and practical aspect of proximity, it is remarkable to see that, for example, in the second half of the 19th and the first half of the 20th century, Dutch cantonal courts and/or first courts disappeared from many places. The impact of this retreat of the judiciary on the behavior of litigants or on society as a whole has, however, not been systematically examined. The societal consequences of centralization of the judiciary for the justiciable is an interesting new revenue for further research (Oosterhuis 2021, p. 663). Did it for instance affect the procedural behaviour of parties and/or the litigation rates in society? Where out-of-court settlements reached more often? What happened to small claims and disputes? The 19th century Gerechtelijke statistiek van het Koninkrijk der Nederlanden provides e.g. a wealth of data to investigate in this respect. To be continued?