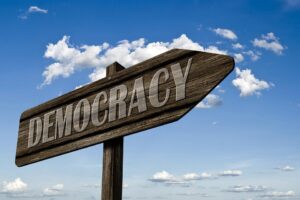 The provincial elections were considered a test case for the current cabinet, since the provincial councils also elect the Senate of the Dutch Parliament. The elections were accompanied by a debate on whether we should get rid of the Dutch Senate. Politicians from one of the coalition parties pleaded for the abolition of the Senate, because the Senate can block legislative bills from becoming law. Seeing as the indirect election of this body does not run simultaneously with the election of the House of Representatives, coalition governments with a majority in the House of Representatives, may have to deal with minority support in the Senate. This can be inconvenient for the parties supporting the government in the House of Representatives. The entire idea of checks and balances between different state bodies in order to counterbalance the exercise of government power, however, seems to be an alien concept to those debaters. They also do not seem to care much about the quality of representative democracy, as they only want to have a more efficient decision making process for the majority. Instead of discussing more efficient decision making at the detriment of effective voting rights of citizens, we should focus on how we can reinforce the democratic position of citizens.

A relevant question in this domain is, if is possible to organize more democracy by giving more room for participative citizenship, and taking the citizen more seriously by giving them more say in public administration in the Netherlands. A subject worthwhile considering from this perspective may be the idea of judicial selection by popular vote. I will elaborate on this below.

Currently in the Netherlands judges are selected by a committee, a joint venture of , the Ministry of Justice and the Council for the Judiciary. Candidates for judicial office must be lawyers and are eligible for appointment after successfully completing several tests, including a psychological assessment, and finishing a post-university training curriculum. Demands placed on prospective judicial candidates establish a high bar and selection procedures are not particularly transparent. Only the members of the Court of Cassation are appointed for life  based on a list of  candidates for each post as provided by the Court of which the Lower House makes a recommendation of three to the government. Would it be possible to organize more democracy by creating more opportunities for participative citizenship and through taking citizens more seriously by giving them more say in the governance of the Netherlands and appointment of officeholders?

A subject worthy of consideration may be the idea of judicial selection by popular vote. Of course I do realize that public elections of judges in the Netherlands is out of reach both as a matter of tradition and because the constitution provides that judges are appointed for life. But the public election of judges would in a single stroke change the legitimacy  of the courts  who are struggling with the perceived gap between rationally applying the law and the sentiments of the public. Judges would then be perceived as judges of the public – that is, if there are enough judicial candidates that dare to compete for a (temporary) post and if there are enough voters.

That it is feasible to design the legislative process for such a change and draft the bills for related legislation has been demonstrated this year by master students of the Utrecht School of Law.

In several countries – cantons in Switzerland and several states of the United States –  judicial selection involves a popular vote. Take, for example, the Swiss Republic of Geneva[1], and the US State of Arizona.

The Geneva Judicial Organisation Act distinguishes between career judges, substitute judges and associate judges. The law provides for the election of judges. Judges are elected by popular vote, according to a majority system, for a term of 6 years. By exception, the judges of the Labour Court are appointed by the parliament (Grand Council). Prospective judges can pose their candidacy through an application for advice on their aptitude at the Supreme Council of the Judiciary (Conseil Supérieur de la Magistrature). Candidates must be Swiss citizens, bear political rights in the canton of Geneva, live in the canton of Geneva, be admitted to the bar as an advocate, have at least 3 years of professional experience, must not be convicted for a crime, and must not be in a state of bankruptcy. A Swiss judge may openly be connected to a political party, even though technically speaking, judges are supposed to refrain from engaging in political debates. There may be competition for the function of higher magistrates like a Procurator General. The Supreme Council of the Judiciary may only have reasons to dispel a judge when grave mistakes have been made. Provisions are in place to allow an appeal against such a decision at the Judges’ court. Court

It should be said, however, that participation in the election for the Procurator General Jonot in 2014 was only 30%, and when there is no competition for judicial functions, elections are not held: single candidates are declared elected tacitly. The malfunctioning of the Geneva judicial organisation as demonstrated by a report of the Accounting Court of Geneva in 2012,[2] could not be prevented by the election system, even though the problems were discussed in public.

In many ways, the USA is more democratic than the Netherlands. Many public functionaries have to be elected, particularly on the state and local levels. In many American states, judges are elected rather than appointed. In some states, judicial elections are openly partisan, whereby prospective judges are required to run for elections and to actively campaign against their opponents. Those campaigns cost money. If you are running for judicial office and you want to attract voters, you need to be visible. One way to achieve visibility is to receive sponsoring. It is not unusual for judges in such partisan elections to connect with organizations who donate funds to their campaigns. Research shows this has two consequences. Firstly, judges who had their campaigns sponsored by businesses are inclined to judge in favor of businesses.[3] Secondly, citizens of those particular states are resigned to the possibility of judicial bias as a consequence of campaigning being a part of the bargain. Campaigning for judicial elections contributes to citizens knowing “their” judges, and they appreciate that.[4] In this context, judicial elections increase the legitimacy of judges and increase acceptance of judicial exercise of power by their citizens.

The state of Arizona has a carefully elaborated system for the initial selection of judicial candidates based on their merit as lawyers. For retention elections a very transparent system of an individual judicial performance evaluation is in place, with individual judicial performance assessments published on the internet. This shows that a combination of appointed judges and judicial elections is possible. Chief Justice Rebecca White Berch explains the success of the Arizona judicial appointment system by indicating that judges who performed badly in their initial term opted not to run for retention; instead, they usually quietly resign their appointments. This explains public satisfaction with most of the judges in Arizona.[5]

I am not certain if such a system can be introduced in continental Europe. The elected judiciary of  Geneva  functions quite similar as the appointed judiciary of the Netherlands, with a strong administrative position of the Managing Committee of the Judicial Power, and a similar position for the Netherlands’ Council for the Judiciary. Apparently it is not simply the possibility of judicial appointment by popular vote that constitutes judicial legitimacy. Yet, research into the vulnerabilities of judicial legitimacy may feed the debates about the selection and appointment of judges and about the evaluation of judges and their organisations. Research into the relationship between citizens and the judiciary may contribute to reinforcing an active citizenship and a stable democracy.

The next Montaigne Blog will be authored by Ton Jongbloed.

[1] The information on The Republic of Geneva was gathered from its excellent website: www.ge.ch.