The International Criminal Court at 18 years: Things to Watch in 2020 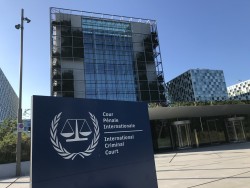 The International Criminal Court (ICC) turns 18 years old in 2020. As such, we can look back on the Court’s ‘childhood’ and forward to its first year as an adult.  Like all childhoods, there have been ups and downs, successes and lessons learned. There have been four final convictions against individuals for crimes against humanity and war crimes, and reparations ordered for hundreds of victims in three cases. There have also been acquittals (most recently of Mr Gbagbo and Mr Ble Goude regarding crimes during post-election violence in Côte d’Ivoire) and cases terminated (such as those in the Kenya situation). The Court has drawn criticism for its lengthy and expensive trials, limited success rate, and faced allegations of politicisation and double-standards. While States continue to ratify the ICC’s Rome Statute (like Kiribati most recently), two States have withdrawn – Burundi and the Philippines. While criticism has, of course, come from those outside the Rome Statute system, in 2019 many of the Court’s greatest supporters raised their own critiques. Given this backdrop, five issues to follow in 2020 include: 1) an independent expert review of the ICC; 2) the election of a new Prosecutor and Judges; 3) investigations in Myanmar/Bangladesh and (potentially) Afghanistan; 4) conclusion of the cases against Mr Ongwen and Mr Ntaganda; and 5) the unexpected.

Independent Expert Review of the ICC

While the Court is no stranger to criticism, consensus was reached in 2019 that a full review of the Court’s operations was warranted. This consensus was voiced influentially by four of the former Presidents of the ICC’s Assembly of States Parties in an article in April 2019. They wrote: “We are disappointed by the quality of some of its judicial proceedings, frustrated by some of the results, and exasperated by the management deficiencies that prevent the Court from living up to its full potential.” At the Assembly of States Parties in December 2019, States parties adopted a resolution that establishes “a transparent, inclusive State-Party driven process for identifying and implementing measures to strengthen the Court and improve its performance”. The review by nine independent experts into the Court’s governance, judiciary, and prosecution and investigations is due to be completed by September 2020. While this review is welcomed, it will not be a panacea to all of the Court’s problems, and ideally represents the beginning of introspection and change – rather than its culmination.

Electing a new Prosecutor and Judges
Something that certainly will have a meaningful impact upon the Court is the election in 2020 of a new chief Prosecutor and six new judges. Following Moreno-Ocampo (Argentina) and Bensouda (Gambia), this will be the ICC’s third Prosecutor. The Prosecutor is an extremely powerful position at the ICC, as the head of the independent Office of the Prosecutor (OTP) responsible for identifying situations, undertaking investigations, and selecting and prosecuting cases. The Court advertised the position of Prosecutor in August 2019 and around 150 applications were received. Around one-third of the applications came from candidates in the Western-European and other group (so-called ‘WEOG’) that includes Australia and the USA, another third came from the African group, and around two-thirds of the applicants were men.

While applying for the position of Prosecutor is open to individuals, candidates for the bench must be nominated by a State party. While States parties may be critical of the ICC and certain decisions taken, they are the ones responsible for the quality and expertise of the judges nominated and ultimately elected. Much work has been undertaken (see for example here) to improve the process by which judges are selected, and an Advisory Committee on Nominations was created. NGOs like FIDH have called on States parties to focus only on issues of merit and the “high moral character” of the candidate, and not to engage in political tactics or vote trading. The elections of the Judges and Prosecutor, who will serve nine year terms, will take place at the Assembly of States Parties in December 2020.

Investigations into Afghanistan and Myanmar/Bangladesh
While the Prosecutor has undertaken preliminary examinations into a number of situations in the past years, a highly contentious one is that into potential crimes committed in Afghanistan by members of the Afghan military forces, US forces, and also the Taliban since 2003. In 2017, the OTP made a formal request to the Pre-Trial Chamber (PTC), as required by art 15(3) Rome Statute, to open an investigation into the situation. On 12 April 2019, the PTC unanimously declined her request based on the “interests of justice”. This unprecedented decision was highly controversial and attracted strong criticism (see here and here). Firstly, it was rendered by the Court after verbal attacks and threats against the Court and its personnel by the USA, including inflammatory remarks by former US National Security Advisor Bolton. The decision can therefore be seen as the ICC bowing to political pressure applied for this purpose by the USA.

The PTC’s decision regarding Afghanistan was also controversial because of the reasoning employed. The judges found that despite a reasonable basis to believe that crimes were committed, an investigation was not in the “interests of justice” due to the lack of cooperation by States, the time elapsed since the crimes, and the OTP’s limited resources. However, there has been very little discussion of interests of justice – with the notable exception of the OTP’s 2007 policy paper. Unsurprisingly, the PTC decision has been appealed by the Prosecutor and victims (which included a large number of amicus briefs), with a decision forthcoming.

In November 2019, the PTC approved the Prosecutor’s request to open an investigation into alleged crimes of deportation and persecution committed against the Rohingya people in Myanmar/Bangladesh. This is controversial given that while Bangladesh is a State party to the Rome Statute, Myanmar is not. The PTC took the decision that while the crimes may have commenced in Myanmar, their continuation on Bangladesh’s territory warrants the Court’s jurisdiction. This decision was welcomed by some as an international response to the widely documented mistreatment of the Rohingya since 2017. The investigation into specific crimes and individual perpetrators will commence in 2020. This criminal investigation is related (but separate) to the current case against Myanmar brought by The Gambia before the International Court of Justice, alleging genocide.

Cases: Ongwen and Ntaganda
Amongst the Court’s case load, two important judgments by Trial Chambers are due out in the next year. The first is a decision on the guilt of Mr Ongwen, the first case from Uganda at the ICC. The trial commenced in 2016 and closing submissions are due from the parties in February 2020. The case relates to 70 charges of crimes against humanity and war crimes including the use of child soldiers, rape, sexual slavery, and forced marriage. There are over 4,000 victims participating in the trial. It is noteworthy that Mr Ongwen himself was recruited as a child solider, and now stands trial for recruiting other child soldiers. Debates have arisen (see here and here) regarding how this will be considered either as a defence or a mitigating factor in any sentencing decision. According to the new timeframes for issuing decisions, a judgment is expected in Mr Ongwen’s case around the end of this year.

The second awaited decision is a reparations order in the case against Mr Bosco Ntaganda. In July 2019, Mr Ntaganda was convicted for 18 counts of crimes against humanity and war crimes committed in Ituri, in the Democratic Republic of Congo (DRC). The case was the first at the ICC to secure a conviction for sexual and gender based violence of rape and sexual slavery. Mr Ntaganda was sentenced to 30 years in prison – the longest sentence by the Court yet. The next phase in 2020 includes (any) appeals of his conviction and sentence, as well as reparation proceedings. This case presents another opportunity (only the fourth to date) for the ICC and Trust Fund for Victims to develop their reparations mandate. The Court is required to consider the scope and consequences of the harm suffered by the victims and to award reparations, which may include compensation, rehabilitation or restitution individually as well as collectively. This will be a difficult task considering the number of victims (over 2000 participated in the trial) and the fact that Mr Ntaganda has been found to be indigent.

The Unexpected…
The final thing to keep an eye out for in 2020 is the unexpected. There are always surprises at the ICC and new developments that present themselves unexpectedly. For example, in June 2012 four ICC staff members visiting the accused Mr Saif Al-Islam Gaddafi were detained in Zintan, Libya for almost one month; and in 2013 Mr Ntaganda voluntarily surrendered himself at a US embassy in Rwanda. These are developments that the Court has to deal with urgently and often without prior planning.

A potential new development in 2020 could be the surrender of now former Sudanese President Mr Al Bashir to the ICC based on the 2009 warrant for his arrest. Given his fall from leadership in 2019 after months of protests, there may be increased political interest in surrendering him to The Hague. This would be a big victory for the ICC, but also one of its biggest challenges given that Sudan is not a State party (the UN Security Council referred the case) and Al Bashir would be the most senior person tried by the Court.

Despite reaching adulthood, the ICC and Rome Statute system still has a lot of growing yet to do (like most of us). Hopefully the independent expert review as well as the careful selection of the new Prosecutor and Judges will assist in this regard, helping the Court to rise to all future challenges whether they are expected or not. Watch this space.