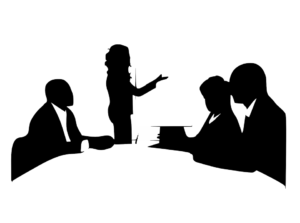 On the 10th of April 2015 the international conference on procedural justice and legal practice organized by the Montaigne Centre took place. Guests and speakers, from Utrecht and from far, gathered at 10 am at a very suitable location: one of the courtrooms of the District Court Midden-Nederland, location Utrecht. After a short welcome by Miranda Boone the conference was officially opened by Ton Hol. He placed the theme procedural justice in the context of the transition from the Enlightenment, when decisions could derive legitimacy through referring to general rules, to the Romantic period, when society requested a more individual approach.

Following that Allan Lind spoke, who flew in from the United States and is one of the founders of perceived procedural justice as a research theme. In his keynote lecture he, in light of his background as a social psychologist, discussed the question why procedural justice is important for people. As the core reason he indicated that when people feel that they are treated fairly, they find themselves part of the collective. However, when people feel left out, they will be less inclined to conform to the wishes of society. This is related to the relevance of the subject, which according to professor Lind lies in the beneficial effects of experienced procedural justice on the acceptation of decisions, compliance, legitimacy of authorities and the trust that people place in the authorities.

After these more general introductions there were various speakers who gave a presentation based on their contribution to the theme issue on procedural justice that was published in the Utrecht Law Review in December 2014. Each presentation was followed by an examination of the contribution by a discussant. Subsequently there was time for a discussion between the speaker and the discussant and with the attendees.

The first contribution which was addressed in this way, was the article of André Verburg and Ben Schueler on the New Approach (Nieuwe Zaaksbehandeling) in administrative law and the link with procedural justice. Central aims of the new case management are final dispute resolution, a tailored approach and the hearing of parties at an early stage. To actually get a grip on the underlying conflict an approach that pays attention to procedural justice is necessary. Discussant Bert Marseille, from the University of Groningen and Tilburg University, confirmed the importance of searching for the underlying conflict and discussed the impact of a high perception of procedural justice on the acceptation of decisions.

Suzan Verberk and Machteld de Hoon, working for the Council for the Judiciary respectively the Ministry of Security and Justice, also emphasized the relevance of the underlying conflict. In addition they covered the concept of the responsive judge and the different barriers that many judges experience in this respect. Their contribution was discussed by the Australian Tania Sourdin. She made some suggestions for future research on this topic, such as researching why people go to the judge and what has happened before they come to the court and the use of both qualitative and quantitative research methods.

After the lunch it was time for Vesna Lazić, from Utrecht University and the University of Rijeka, and discussant Cristina Mariottini, researcher at the Max Planck Institute in Luxembourg. They devoted their attention to procedural justice in cross-border conflict resolution under the EU regime, in which they, amongst others, discussed issues related to jurisdiction.

Leonie van Lent then linked the theme procedural justice to the principle of transparency as it applies in criminal law. Judges should not only be concerned with procedural justice; this should also be seen by the public. More transparency in criminal cases leads to greater scrutiny and a possible increase of procedural justice and legitimacy. Lieve Gies, from the University of Leicester, gave a reaction to this presentation and in doing so particularly focused on the – in her opinion limited – added value of cameras in the courtroom.

The last article that was discussed was the article by Miranda Boone and PhD student Mieke Kox about procedural justice in prisons. More specifically, they discussed the tension between the pursuit of a tailored treatment of detainees and the importance of neutrality. Gill McIvor, from the University of Stirling, spoke in response to this article about the so-called problem-solving courts, the experiences of suspects with these and the importance of an individual approach.

Hereafter professor Lind had the floor once more, who – reflecting on the various contributions – concluded that still no complete clarity exists about the term ‘procedural justice’. Rick Verschoof allocated in his closing remarks the contributions to different categories and aimed, through interaction with the audience, to look towards the future by discussing suggestions for further research. One of the suggestions was to research which elements of procedural justice deserve the most attention and how the importance of the procedure relates to the importance of the outcome. It became clear that procedural justice remains an extremely relevant research theme. The day was concluded with drinks, during which the participants looked back at an intensive and very interesting conference.

Lisa Ansems is a student in Utrecht University’s Legal Research Master and works as a Student Research Assistant at the Willem Pompe Institute.